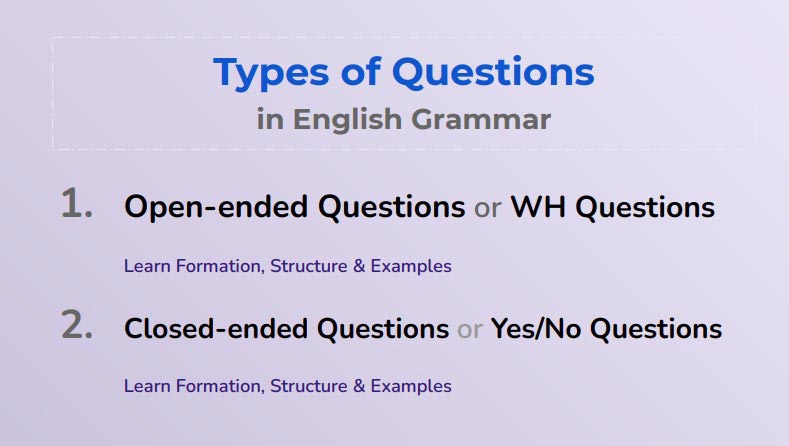 Questions are one of the five types of sentences in English. It is important to know how to correctly form interrogative sentences or questions. Once you take a look at how the verb takes lead in Closed-Ended Questions or how the WH Words are used to form Open Questions, you won’t struggle to form these questions anymore.

There are mainly two types of questions in the English language.

These two types differ mainly in sentence structure and the options in their answers.

What is an Open-Ended Question?

An Open Ended Question signifies that the answers to it may vary between several options. These questions are also referred to as WH Questions since they mostly consist of WH Question words. There are nine WH Question words in  English and they are - What, Who, Where, When, Where, Whom, Whose, Why and How. Take a good look at how all these words start with either “W” or “H” and hence are given the name WH Words.

WH Words and Their Answers

How to Form WH Questions?

WH Questions are very easy to spot since these WH words flag the start of these investigative sentences and the interrogation mark sits at the end. But forming them correctly while sticking to the grammatical rules can seem a bit tricky.

When auxiliary or modal auxiliary verbs are used to help the main verbs in interrogative sentences, they follow the formula below -

Here, the WH Words are the objects of the sentences that come before the modal verbs - would, should or could. Respective subjects and main verbs follow after that.

Have  |  Whom has the interviewer summoned?

Modal |  Why would she come back?

Looking at the simple present tense examples would give an idea about how the structure works. The normal Subject + Verb + Object sentence structure is maintained as WH Question words take place of the subject followed by the main verb and object before ending with an interrogation mark.

If “Whose” and “Which” act as part of the subject in a sentence, the structure changes a little.

Negative WH Questions are composed of “Auxiliary Verbs + Not.” The negative word “Not” is attached to the existing auxiliary or modal verbs. Absence of an existing helping verb (do, does, did, have, has or had) to attach the “Not” calls for their addition. Contracted negative verb clusters like - don’t, doesn’t, didn’t, isn’t, aren’t, hasn’t, haven’t etc. sit after the subject and before the main verb. In the case of pronouns, the auxiliary verb and “not” sit on either side of the pronoun.

Statement questions are statements or declarative sentences that can be asked as questions barely with intonations (while speaking) and interrogation marks (while writing). In the case of WH Questions, adding necessary WH Words at the end of the statements can turn them into questions.

There is barely any formal or grammatical basis for these questions but people usually use statement questions in informal settings when in a hurry to get additional information.

WH Questions populate the majority of the total number of questions in the English language. These questions generally have falling intonation.

Where did he go?

The intonation shifts when people are trying to verify some information that has already been given. In these situations, people tend to use rising or fall-rising intonation in general.

Who paid for the car?

What did you just say?

What is a Closed-Ended Question?

A Closed-Ended Question means that the answer to the question has only one answer, either "Yes" or "No". These are also termed as “Yes/No Questions” since these are the only possible answers. Yes/No Questions differ greatly from WH Questions in structure and intonation.

How to Structure Closed-Ended questions?

Yes/No Questions can also be constructed with or without the use of auxiliary verbs.

Have  |  Have they been to any concert before?

Modal |  Should I hold the door for you?

Additional do, does or did is added to the question form if there are no auxiliary or modal verbs to use in the initial statement.

When the be verb acts as the main verb, it does not require any auxiliary verb’s assistance.

There is often more than one auxiliary or modal verb in a single sentence. That makes things a bit tricky as to which one would act as the auxiliary when forming questions out of them. One way is to use only the first auxiliary verb before the subject and send the rest to align after the subject.

In the case of modal verbs accompanied by several auxiliary verbs, only the modal verb will come before the subject while the rest follows it.

Attention: Only modal or auxiliary verbs can sit before the subject, unlike the main verbs.

The question starts with “be + subject” then the general word order continues before being ended with an interrogation mark.

When you are asking a Yes/No Question that starts with a “Have,” it sounds rather too formal so people sometimes choose to use “Do have” or “Have got” to neutralize that overly formal overtone.

People tend to use negative Yes/No Questions to verify something they think they already know or when they suppose they know what should be done. The negative word, “Not” is used to ask a negative question.

The contracted version, -n’t is attached to the auxiliary verbs for daily use. Using the whole ‘Not’ in questions makes them sound too formal in nature.

People often use negative Yes/No Questions to invite, offer or insist on something.

The intonation on the Yes/No questions is either rising or fall-rising depending on context. When the answer to the question is unknown, the intonation rises.

Are you warm right now?

When a question is asked but the one asking it thinks s/he knows what the answer is going to be; asks anyways for confirmation.

Are you still based in Turkey?

In a conversation where questions are asked to and fro, people tend to ask several questions one after another but carry on with the same fall-rising intonation through all of the questions.

Q: Have you been renting a house?
A: No, staying as a paying guest.

Q: It is expensive?
A: Not really.

The above article has attempted to compile all the necessary information so that forming questions in English does not remain a challenge anymore. Neutral and negative questions have slight differences in formation with a few tricky rules here and there. Keeping them in mind will help construct correct inquisitive sentences for daily use.

Published By LearnGrammar.Net
Previous:
What is Third Person in Grammar
Next:
Sympathy vs. Empathy - Remove the Confusion